The Cat who would be Dog 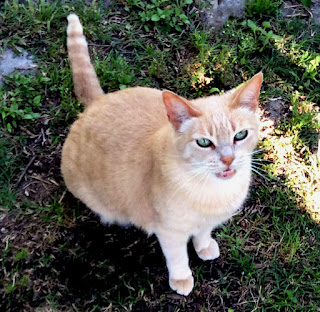 I am no stranger to strange animal minds, having the fortune of being the human mother to several at the moment and many more in the past. What passes for acceptable or common behavior around here brings people up short when I mention it. What? You don't have a Border Collie who does art? You mean to tell me that your cats eat cat food? Doesn't your Westie eat bees?

So, I guess what I am saying is that I am pretty calloused to bizarre pet antics and nothing seems to shock me very much. Until recently.

To set the stage, let me outline the situation. We have had a relatively large number of outdoor cats shacking up with us for years. The number sometimes grows as high as 6 or more which means we are definitely in 'crazy' cat people territory.

We had two 'original' recipe cats that graced our back yard. They both started off as feral/homeless joiners but hey, it has been more than 20 years since I had any urge to 'get a cat'. They just drift in like the breeze. Anyway, these two cats lorded over the back yard while any other 'new' cats claimed the front yard and front porch. You would think that these two groups would interact, but they avoided contact with one another. As time went by, first one of the backyard cats passed on due to extreme old age and then the other got doddery so I brought him inside to finish his life crated and spoiled. Thus the backyard was empty of cats.

We expected the front door cats to take over the back yard. This did not happen. Six months later and my doddery old cat had left for rainbow bridge and the front doors still would not visit the backyard. Give it time we thought. Meanwhile they stayed rooted to the front yard and front porch. This would not be so bad, but four cat food bowls, a water bowl and four kitty condos on a front porch makes it very hard for people to walk through. We dreamed of the day they would take the hint and transfer their homestead to the backyard.

Two years passed with the cats venturing into the backyard rarely and if we found them there they would scramble to exit as if caught with their hands in a cookie jar. No amount of calling sweetly would bring them back. The dogs thought this was hilarious and would snort with laughter. Then one day, Sandy, our littlest cat 'found' the backyard. She began hanging out on the back porch all the time. 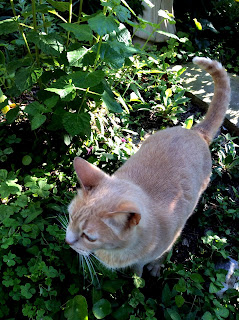 She wandered our back garden looking around like she could not believe what a wonderful place she had found. She was not troubled at all by the dogs and if they even looked at her wrong she would chase after them. She became the backyard queen. After eating on the front porch she would march inside when we opened the door and lead us to the back door so she could re-enter her domain. Very royal, that cat. No going round the side under the gate for her, nope - opened doors all the way. 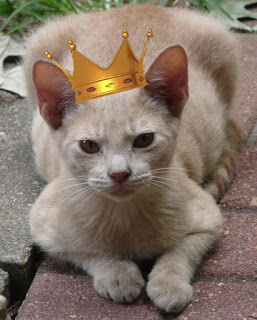 So Queen Sandy ruled the backyard. Little did I know but she was taking notes and plotting her next step. The first slightly cold weather of this last year, Sandy moved inside. We had been accustomed to letting all the cats come inside anytime we opened a door. Invariably they would then ask to exit the next time we opened a door. Not Sandy. She took up residence and that first night plopped herself onto the bed and slept there all night. She was very quiet, found a place that was not occupied by a human or a dog (not an easy task on my bed) and didn't move a muscle all night. 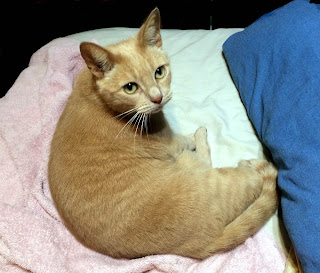 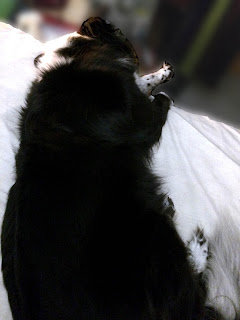 
The dogs didn't even bat an eye and just accepted this as normal. The Westie, who normally cannot control his 'snap at the cat' behavior even though we have said 'No Cat' so many time he must think it is his second name,  LOVED Sandy and would snuffle her and lick her ears. Trudy took to bathing Sandy in Border Collie saliva so that her entire head would be wet. They made room for her on any bed she wanted and stood back from the feeding bowl Sandy was using.

The other cats overnight shifted from front yard to back yard mode as well. I don't know, I guess they have some sort of email group or something and coordinate their activities, but one day, no cats in the backyard and then 24 hours later, it's all cats except for the one who is now a dog.

Strangely, Sandy's trans-dog thing was also noticed by the cats who began to treat her like a dog. They expressed distrust of her and I overheard them calling her names and trying to bully her. She, not being a wimp, gave it back and currently there is an uneasy truce.

Now that the weather has warmed up, Sandy does not spend every night inside, but most nights. I can also say that I don't think she is through with the species ladder climbing either. Due to all the time she spent inside there were a couple of 'accidents' of a bathroom nature. She always chose one of the dog beds and was immediately regretful and would come to me to show me there was a need of 'cleanup on isle 3'. So, even though we swore we would never have a cat box in the house, guess who has a cat box in the house... She only uses it occasionally and never anything more than liquid, thank God, since our 'truffle hounds' would find that oh so delightful.

So, what is Sandy's next stop. I am pretty sure she has set her sights on human. After all, we have an indoor toilet and now so does she. I haven't found her wearing my clothes yet, but who knows...