Best Days for the Westie 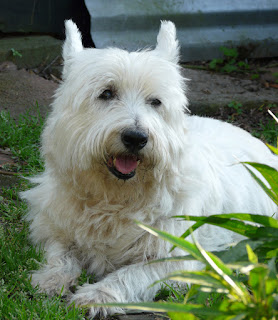 It is still just March and although the outside temperature is not all that hot or humid, inside I have the air conditioner running.  Normally this event does not happen until May.  Okay, sometimes April, but really it is sort of a badge of honor between my husband and I that we hold out as long as possible before turning on the AC.  No, I don't know why except that being tough and frugal is sort of a thing in our household.

Not this year though.  This year the AC is running cold at least in one room (window units for this old house).  The fans in the room circulate this cold air and an essential oil diffuser is providing a light scent of rosemary. It almost feels like a little bit of winter, or at least early spring in here while outside Houston is showing its humid, 82 degree plus, dark underbelly of impending horrible summer.

Have we come to our senses and opted for a more comfortable existence for the humans in this house.  No.  Although this human is enjoying the 'room of comfort', this is all being done for a very special family member.  The Westie.

Just this last December his royal highness (see Westie Rules) turned 15.  We have never had a dog this old before, but it isn't just age that is the issue.  It turns out that the Westie breed comes from Scotland originally.  The Scottish isles are known for things like sheep and green and above all a maximum temperature of 63 degrees.  They probably also don't have daily humidity ranging near the 90 percent range and I am guessing not as much mosquito, flea and other irritating pests that plague our sweet Westie.


Summers have always been tough on him.  His pretty white fur us accompanied by tender pink skin.  Somehow this combination makes it possible for a type of fungus to grow on him.  It is called Malassezia Dermatitis and according to one website "Some conditions which could lead to a yeast proliferation include: high environmental humidity, an increase in skin oils (from an allergic flare up), an immune deficiency, flea, airborne and/or food allergies, or seborrhea (excessive oil production of the skin). Some Westies are actually allergic to the yeasts themselves."


Gosh, can we check just about all of the above for our dear little guy.  So, every year of his life has been a battle to keep his skin under control and give him some peace from his excessive itchiness.  Thus he has on average had 1 to 7 baths per week for his entire life (less in the winter and more in the summer).  Our go to shampoo is a tea tree oil human shampoo followed by a tea tree oil conditioner.  We also make many of his meals using this recipe guide and when we give him kibble it is grain free.

All of our care of him is met with tough resistance by a larger than life personality.  He does not want to be touched unless your are combing him or brushing him.  "Hands off you peasant!"  This is such a deal for him that once when he was starting to fall off the bed I reached for him to keep him from falling.  He reacted by pulling back from me so violently that it hurled him off the bed.

His long fur which is great in the winter needs to be trimmed for warm weather comfort.  This amounts to a wrestling match between me, an indignant Westie and an electric trimmer.  No, he will not be still, "Unhand me you knave!!", and ultimately I have to pin him with knee or foot in order to use both hands to trim without cutting him.  It is exhausting for us both but must be done.

Nail trimming is another ordeal by fire.  Through the years I have learned just to treat this much like a cowboy pins a roped calf.  Get him on his side and hold him down then quickly choose a toenail.  Snip.  Any hesitation is seen as weakness and he will exploit it.  Now I know you are thinking that two people could do this better than one, but actually he takes advantage of this in devious ways which result in two people knocking heads into one another or otherwise inflicting personal damage.  At the vets it takes three skilled people to subdue him into cutting nails.  As a result his nails are not as short as I want, but not so long that they interfere with him walking.

He has in the last 12 months had the following:

We love this little guy so, so much.  All his tough, indignant, bull-headed ways are in the end very endearing to us.  Maybe it is Stockholm Syndrome or something, but I just can't think of life without this sweet little, hard headed guy.

You make different decisions when a dog is three than when a dog is fifteen.  Those extra years weigh heavy in choices and eventually they may push us to make a final choice with him.  I have a friend who had a dog who was 15 plus years old when he began to go through 'old dog issues'.  During one of the multiple vet visits a veterinarian said to her "You know you don't have to wait until the bitter end.  You can just decide you have all had enough."  Those are wise words indeed.

I have taken those words to heart and last year after the 'pulling his own tooth incident' put forward a Best Days plan for my little guy.  Each day my husband and I will strive to make sure our little Westie is having a Best Day.  This means things like frequent snacks.  It means things like seldom leaving him alone.  It means being proactive in treating the yard and other animals for fleas.  It means brushing him and flea combing him multiple times a day to make sure nothing is biting him.  It means making one room in our house as much like Scotland as we can.  It means doing things his way unless it would be harmful. 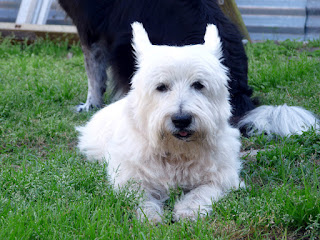 We are living in his Best Days which hopefully will be many more days to come.  But when the Best Days are over we are not going to be selfish.  If we cannot make him comfortable we will help him in the best way possible.  No one wants to make an end of life choice for their pet.  Everyone hopes that when the end comes the furry little love will just pass peacefully in their sleep.  That may or may not be the way he goes.  Considering how he 'is', he will probably make it very hard on us.  We have made our choice not to wait for the bitter end in order to forestall our grief but until that day we will do everything in our power to make his life the best it can be.

All the best to you and your little furry children.

Posted by Julie Byrd at 3:29 PM No comments: