Anyone who is a sibling has probably experienced this to some degree.  Your brother/sister is in competition with you to get all the good things that your parents and life has to offer.  This can lead to stressful encounters and in some cases I have read about in the news, lawsuits and worse yet, homicide.  Luckily for my sister and I it never devolved into anything more than a few physical scuffles, name calling and tears.  The physical scuffles were confined to our very early childhood (meaning that she being almost three years older than me and therefore much bigger did not hesitate to use her physical advantage in conflicts before she reached the 'age of reason' - also known as comprehending that 'parents will punish you if you slug your sister') and we weren't allowed to use course language, so the name calling was typically made up words that sounded bad (she once called me a 'sclurge' which did not infuriate me as much as the fact that she would not tell me what that word meant).  Eventually we learned to ignore one another in spectacularly spiteful ways (sticks and stones are nothing compared to the pain of a sister's cold shoulder).  Finally we grew up and no longer needed the sibling rivalry, but it served it purpose to harden us appropriately to the travails of the common workplace.

I had forgotten about sibling rivalry for the most part until recently in having to watch it develop in my own little fur children.  I don't think it will come as a surprise to anyone to learn that my dogs are jealous of one another.  It is not just a same species thing either.  My dogs and my cats are jealous of one another and seek to one up each other all the time.  One of my cats, the smallest of the bunch, will saunter into the house when we open the front door and proceed to nonchalantly wander over to the closest dog and rub up against them, all the while looking up at me and purring.  The dogs are quite taken aback, but also powerless to do what they really want to do which is nip that cat and make her run.  She knows they will be chastised if they are even slightly rough with her.  She also knows that if I was not present she would not be able to get away with this kind of behavior, so she really pours it on thick - headbutting and purring and pushing into them until they give ground to her.  She is willing to chase them all over the house like this, but I recognize it for what it is and keep her from bullying them too much.

The biggest sibling interaction problem I have is with the dogs.  It seemed to begin from the moment we brought little Trudy our Border Collie home.  Lewey, the Westie was convinced that we had actually brought in some sort of vermin and he was going to do us a favor and dispatch it post-haste.  It took several days of him biting the puppy barrier and being told NO! before he realized he was not going to be allowed to kill and eat the puppy.


He eventually realized how great it was to have a puppy to play with and for a little while things were quite nice in Lewey land. 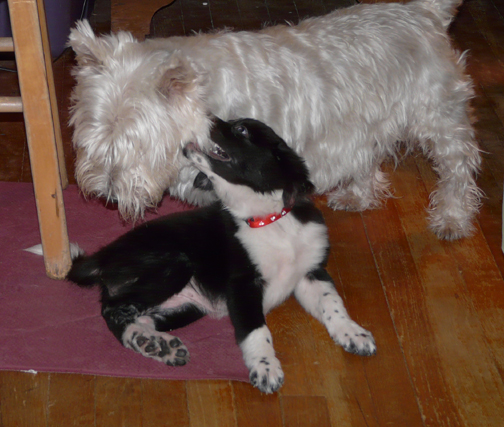 He didn't mind so much when she grabbed him by the face because after all, she was very small. 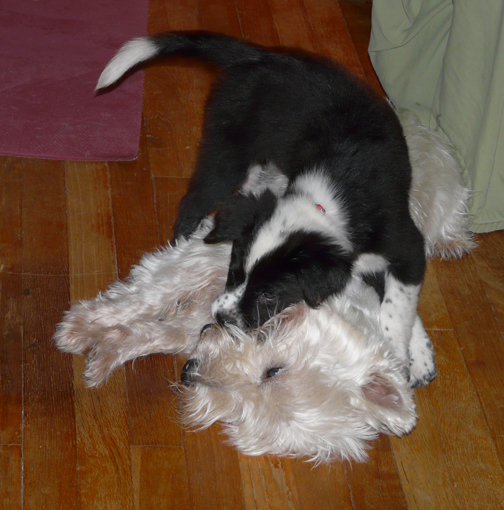 He even let her sometimes pin him down and it was all great fun because after all, if he really wanted to... 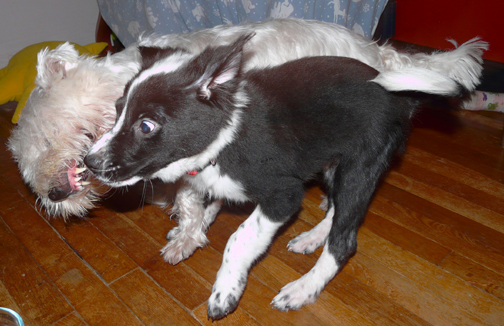 He could show her who was boss.


Then the sky fell, or more accurately, growth hormone began to surge through little Trudy and she did not remain the little thing she was.  She became She-Ra - Princess of Power practically overnight.  At first, King Lewey was merely annoyed.  He couldn't actually figure out what the problem was and how he had gone from being bigger than Trudy to being smaller than her.  The only way to resolve this was to challenge her.


The only problem was that Trudy was sneaky. 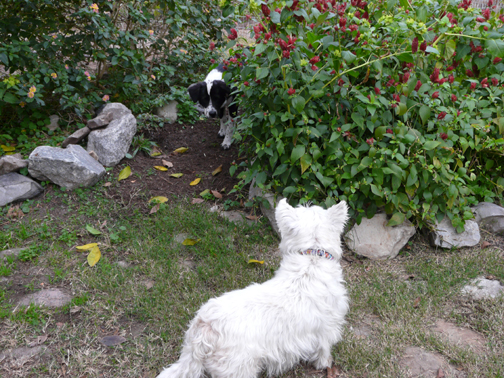 She refused to fight fair and become small again.  She even went as far as to flaunt her size... 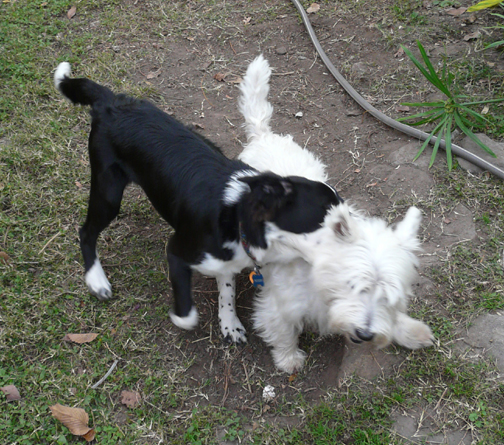 and bite his neck... 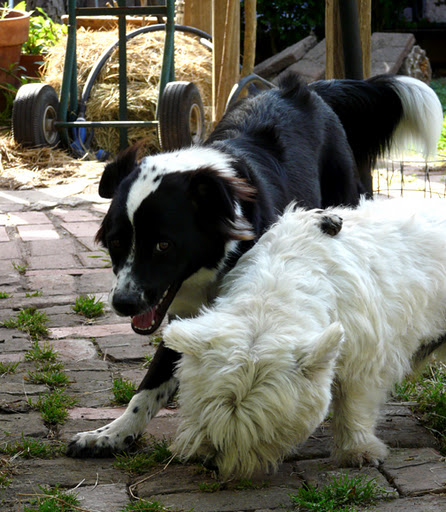 ... and even put her paws on him and stood over the top of him.

This all made Trudy very happy.


It also made Lewey something other than happy...


We keep telling Lewey that eventually Trudy will grow up and stop being such a bully.  Believe me we do our best to keep the peace between the two of them, but sometimes Lewey decides to take matters into his own paws.

This is all very humorous until one of us humans gets caught in the crossfire.  I have been nipped by Lewey as he was trying to repay Trudy for bowling him over in the back yard and knocking him into the fig tree.  I had witnessed the encounter and had Lewey beneath my feet to defend him as Trudy was making whirling passes around the yard completely oblivious to my commands.  As she came near I reached out to push her away at exactly the same time Lewey leaped forward to exact his revenge.  He caught me with his little middle teeth so hard it left a quarter size bruise on my forearm - mind you he did this through my long sleeve shirt (he was very, very sorry afterward and looked completely embarrassed).

Just last night I was doing my best to dry the dynamic duo off after they had been out in a very welcome and unusual rain storm.  I had them blocked into the washroom and had dried them both fairly well but I wanted to check and make sure their feet were clean.  My intention was to finish with Lewey first and then let him go into the house while I worked on Trudy.  She decided as I bent down to finish little Lewey's legs that she was through waiting.  She proceeded to leap over both of us, but failed to calculate that I was in motion toward the floor.  Her shoulder caught me in the side of the jaw and I saw stars.  Luckily my jaw was merely bruised instead of broken (she was not sorry in the slightest for bumping into me and in fact wondered why I was yelling).

So yes we all have our work cut out for us.  Lewey has to somehow re-establish his kingship.  Trudy must learn to be a calm and considerate princess.  I must learn to stop getting in the way of dogs in motion.
Posted by Julie Byrd at 5:17 PM No comments: