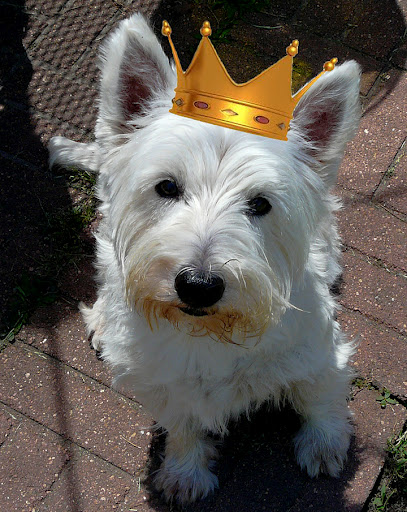 1.  I am the Westie, the only Westie and there are no other dogs before me.  In fact the Westie is not a dog; He is the King and all others are His subjects.  You are here to do His bidding.


2.  There shall be no closed doors between Mommy and the Westie.  And yes, this includes the bathroom door and He doesn't care if she wants privacy because He must be near her at all times.  No, this does not mean He wants to be in the shower with her, He is just fine out there on the bathmat, thank you very much.  Mommy is not to go outside without the Westie or if He is outside she is not to go inside without Him and if she forgets this for even a moment it is only her fault that He must bite her feet.

3. The Westie's back is made for scratching and you, His subjects, are supposed to do this whenever He wants it for as long as He wants it.  It doesn't matter if it is 3am, damn it, scratch His back. This is why combs have been invented and you should be combing Him right now.


4. The Border Collie is just a dog and beneath the Westie in every way, so she needs to stop towering over Him.  She needs to stop biting His neck and she especially needs to stop straddling the top of Him and walking when He walks so that the only part of Him that is visible is His royal head.  This is not okay and it is definitely not funny.  She is to be meek and submissive to His will, especially those times when He finds her to be sexy.


5. There is no food better than cheese except for bacon so you should not feed the Westie anything else.  And for the record, when He wants to eat inside instead of out on the back porch you should immediately bring His bowl inside, being sure to leave the Border Collie outside.  He doesn't care if He makes a mess on the kitchen floor.  He is the King - He does what He wants!


6. The Westie shall not be touched while He sleeps.  This rule especially applies to the Border Collie.  If you touch Him while He sleeps then it is your own fault if He startles you with his loud RAURRGHHHH! and snaps at you.  And if this happens you are to be very afraid and not laugh or smirk or fuss at the King.  And you are especially to never touch Him again really quickly and then run away gaily as some Border Collies are known to do.


7. All vermin belong to the Westie to be chased at His whim.  He is the one who decides what is vermin which includes all mice, rats, opossums, bugs in the house, other dogs, cats and squirrels... especially squirrels.  The Westie is not to be admonished in any way for chasing, barking at, attacking, harassing or otherwise dispatching any vermin.  He is also not able to hear you when He is focused on vermin so why even waste your breath?


8. The Westie will roll in whatever He wants to roll in which includes bird poop, slugs, rotten fruit, crushed grubs, snails and especially opossum poop.  If He has rolled in something He is not to be admonished in any way and certainly He is not to be bathed.


9. Do not touch the Westie's nails and in fact, leave His feet alone.


10. The Westie is full of love for you and wants you to be happy doing His will.